Currency pair Euro/Dollar EUR/USD continues to move within the framework of strong growth and the formation of the “Wolfe Wave” reversal pattern. Moving averages indicate a short-term bullish trend for the pair. Prices went up from the area between the signal lines, which indicates pressure from buyers of the European currency and a potential continuation of growth from the current levels. At the time of the publication of the forecast, the Euro/US Dollar rate is 1.2039. As you can see, after a strong fear, the bulls were able to seize the initiative. As part of the Forex forecast for December 2, 2020, we should expect an attempt at a bullish correction and a test of the resistance level near the 1.2115 area. Further, the rebound and the continuation of the fall of the Euro/Dollar currency pair. The potential target of such a movement on FOREX is the area below the level of 1.1705. 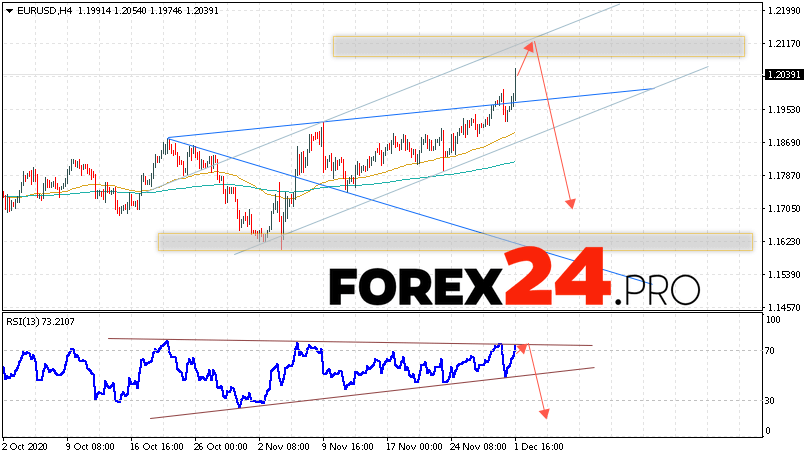 Among the important news from Europe and the United States that may have an impact on the EUR/USD pair, it is worth highlighting: ADP United States Nonfarm Employment Change, Statement by the Federal Reserve System (Fed) Chair Powell Testimony, EIA United States Crude Oil Stocks Change.

EUR/USD Forecast Euro Dollar December 2, 2020 assumes the development of a correction and a test of the resistance area near the level of 1.2115. Where can we expect a rebound and an attempt to continue the pair’s fall to the area below the level of 1.1705. A test of the trend line on the relative strength index (RSI) will be in favor of reducing the currency pair. Cancellation of the EUR/USD pair fall option will be a strong growth in quotations and a breakdown of the level of 1.2175. This will indicate a breakdown of the resistance area and continued growth of the currency pair on Forex to the area above the level of 1.2365.