The downward resistance test on the relative strength indicator will be in favor of EUR/USD quotes reduction. The second signal will be a rebound from the lower border of the «Triangle» model. Cancellation of the option of falling quotations of the currency pair Euro/Dollar will be a strong growth and the breakdown level of 1.1295. This will indicate a breakdown of the upper boundary of the channel and a continuation of the ascent to the region at the level of 1.1405. Expect confirmation of a fall on the EUR/USD pair with the breakdown of the support area and closing below 1.1140. 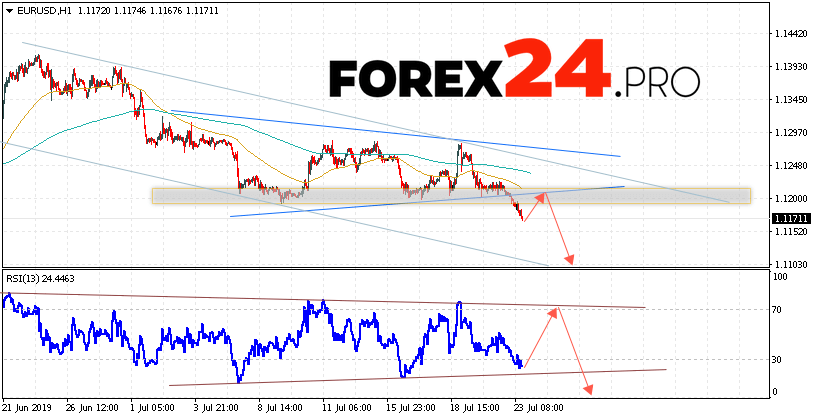 Among the important news from Europe and America, which may have an impact on the EUR/USD pair, it is worth highlighting: United States Existing Home Sales.

EUR/USD Forecast Euro Dollar July 24, 2019 implies an attempt to test the resistance area near the 1.1205 level. Where should we expect a rebound and an attempt to continue to reduce the pair to an area below the level of 1.1100. In favor of reducing the currency pair will test the downward trend line on the indicator of relative strength. Cancellation of the option to reduce EUR/USD will be a strong increase and the breakdown level of 1.1295. This will indicate a breakdown of the resistance area and continued growth of the pair to the area above the level of 1.1405.