Currency pair Euro/Dollar EUR/USD continues to move as part of the bullish correction and the downward channel. Moving averages indicate a short-term bearish trend for the pair. Prices broke through the area between the signal lines upward, which indicates pressure from buyers of the European currency and a potential continuation of the growth of asset quotes from current levels. At the time of the publication of the forecast, the Euro/US Dollar rate is 1.1849. As part of the Forex forecast for September 3, 2021, we should expect an attempt to develop a slight rise in prices and a test of the resistance level, which is located on the pair near the 1.1895 area. Further, a rebound down and a continuation of the rise of the Euro/Dollar currency pair. The potential target of such a movement on FOREX is the area above the level of 1.1655.

An additional signal in favor of reducing the EUR/USD quotes will be a rebound from the upper border of the descending channel. The second signal will be a rebound from the resistance line on the relative strength index (RSI), as we can see there have already been several bounces from this line, it is possible that the current test will provoke a fall in the pair. There are also risks of formation of the “Head and Shoulders” reversal pattern. Cancellation of the option of falling quotations of the Euro/Dollar currency pair will be a strong growth and a breakdown at the level of 1.1945. This will indicate a breakdown of the upper border of the downward channel and a continuation of the rise to the area at the level of 1.2235. It is worth waiting for confirmation of a fall in the EUR/USD currency pair with the breakdown of the support level and closing prices below 1.1805, which will indicate a breakdown of the lower border of the bullish channel. 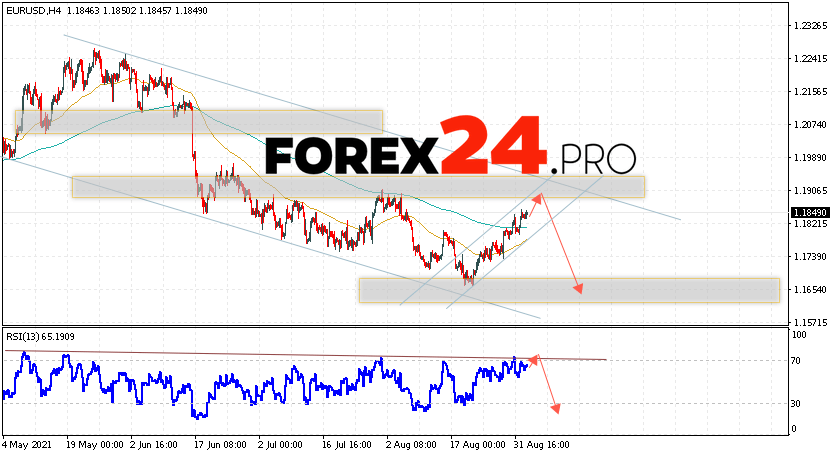 Among the important news from Europe and the United States, which may have an impact on the EUR/USD pair, it is worth highlighting: European Union Retail Sales m/m, United States Nonfarm Payrolls, ISM United States Non-Manufacturing Purchasing Managers Index (PMI).

EUR/USD Forecast Euro Dollar September 3, 2021 assumes the development of a correction and a test of the resistance area near the level of 1.1895. Where can we expect a rebound and an attempt to drop the pair to an area below the level of 1.1655. A test of the trend line on the relative strength index (RSI) will be in favor of reducing the currency pair. Cancellation of the EUR/USD pair fall option will be a strong growth in quotations and a breakdown at the level of 1.1945. This will indicate a breakdown of the resistance area and a continuation of the rise of the currency pair on Forex to the area above the level of 1.2235.