Want to know the current price of Microsoft and what will happen to MSFT stock next? On this page, we share the latest news about Microsoft and give advice on buying stock or even selling. You will also be able to see the latest Microsoft (MSFT) forecast January 2022 from our experts.

Should you buy or sell Microsoft stock today? To what levels can stocks rise during January 2022? How much will MSFT stock cost? We have been making forecasts of exchange rates for a long time, and we can also predict the behavior of the stock market using technical analysis and simple indicators.

We also take into account technical, fundamental analysis of stocks, news background, general geopolitical situation in the world and other, smaller factors. The stock forecasts indicate the target levels for Microsoft shares, both ascending and probable falling.

Microsoft quotes continue to move as part of the correction and the formation of the ”Triangle” model. As a rule, the market breaks such a pattern upwards, in the direction of the main trend. Moving averages indicate a short-term uptrend in MSFT. Prices broke down the area between the signal lines, which indicates pressure from the sellers of securities and potentially a continuation of the fall in the near future. At the time of publication of the forecast, the share price is $ 327.43 per share for Microsoft. As part of the stock price forecast, we should expect an attempt to continue the development of the correction and test the support level near the area of ​​320.05. Further, an upward rebound and a continuation of the rise in the value of securities. The potential target of such a movement is the area above the level of 380.00 already in January 2022. 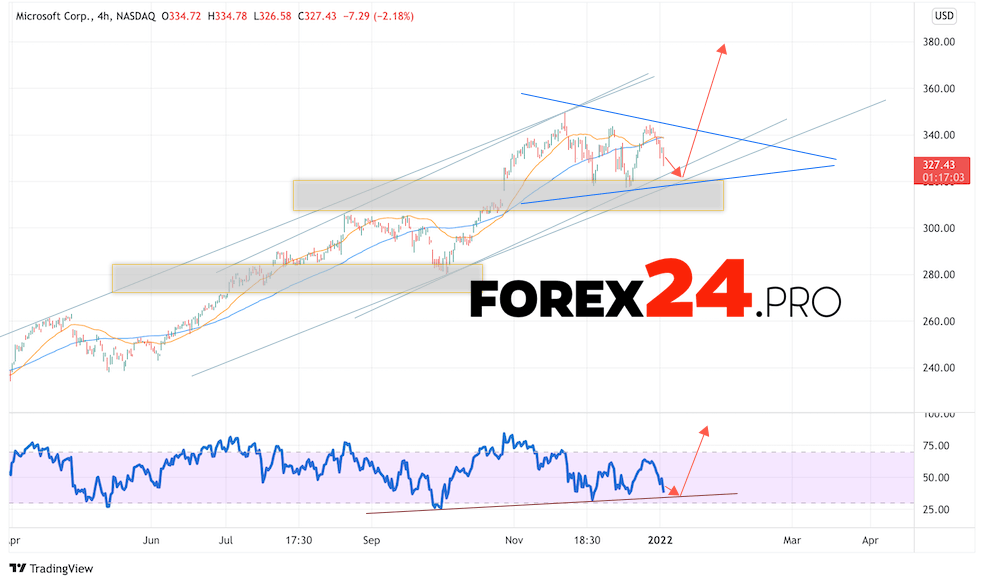 Microsoft (MSFT) forecast January 2022 assumes the development of a correction in securities and a test of the support area near the level of 320.05. Where can we expect a rebound and an attempt to continue the rise of shares to the area above the level of 380.00. A test of the trend line on the relative strength index (RSI) will be in favor of the growth of securities. Cancellation of the option to raise MSFT will be a fall and a breakdown of the level of 305.05. This will indicate a breakdown of support and a continued fall in value to the area below the level of 280.00.

Fast payouts, lots of markets to trade and 24/7 Crypto trading, what isn’t there to like?
Discovered this broker a few months ago when I was looking to margin trade DOGE, and noticed that you can hold positions over the weekend which you can’t with most brokers.
Can’t complain really.

Peter Lanceley
Rated 5 out of 5
Review of InstaForex

I got a bonus from the company and try to work with minimal risk. I understand that they need to work out bonus money in order to be able to withdraw something from the account. But it’s important for me to trade in the real market and understand how well this works for me. It is very pleasant that instaforex gives such an opportunity to run through any system without attachments. Before that, I immediately lost it, because managers at other companies persuaded to replenish the account without preliminary tests.

Alex
Rated 5 out of 5
Review of RoboForex

I have been cooperating with this broker ROBOFOREX for a year now and am very pleased with both the trade and the general impressions of the cooperation. Funds from the account are withdrawn stably and without delay. Absolutely satisfied with the conditions and professionalism of the support staff. Thank you very much for the service provided, everything is done very conveniently.